Boniface Announces Reform Plans for Harford Board of Education 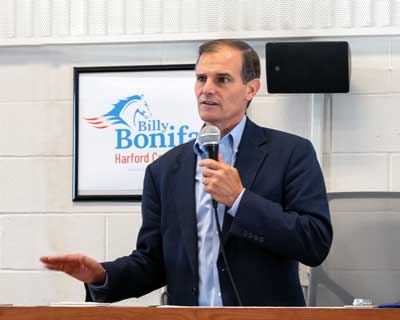 Billy Boniface, Republican candidate for Harford County Executive, has today unveiled his five-point plan to reform the makeup of the Harford County Board of Education and to provide greater oversight.

Boniface, a former President of the Harford County Council, is proposing the following:

“More than one-half of Harford County’s General Fund dollars go toward education, yet county government and the taxpayers have very little say in how those funds are spent,” Boniface said. “If elected, one of my first actions as county executive will be to establish the Harford County Education Accountability Commission, whose role will be to advise the county administration on matters relating to education funding. This commission will represent a wide variety of interests, including parents, educators, and budgetary experts.”

At the same time, Boniface will work collaboratively with the county’s delegation to the General Assembly on the state legislation required to reform the election and makeup of the Board of Education.

Boniface’s proposed election process for the Board of Education will mirror that which was used to elect members to the Harford County Council prior to the 2002 election. Each Harford County voter will have the ability to vote for all seven seats, and members will be required to live in the districts that they represent in order to ensure geographic diversity.

“The last two years have shown clearly that parents and taxpayers need to be able to hold all elected officials accountable for decisions that affect their families. That is why as County Executive, I will work to reform the election process for the Board of Education,” Boniface said.